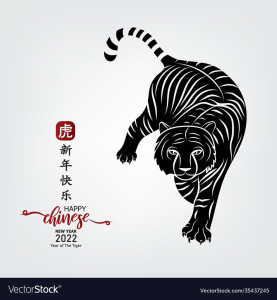 Those born in 1974, 1986, 1998 and 2010 also belong to the sign of the Tiger, but their combination with the Earthly Branches is different and they are subject to other energies of the cycle of the 5 elements or 5 phases.

The corresponding sign of the zodiac is Aquarius (Western astrology).

The Tiger is big, bold and powerful. Four proud tigers guard the Four Directions: the Black Tiger of winter watches over the north, the green one of spring over the east, the red one of summer over the south and the white one of autumn over the west. In the center, the Yellow Tiger, representing the Sun, watches over. The Chinese god of wealth, Hsai Shen, rides a tiger, and therefore this animal brings good luck. All tigers scare away thieves, ghosts and fires. The tiger is therefore a formidable totem animal to contact in the shamanic world to support exile and purification.

The Year of the Tiger is explosive, wildly creative, of great depth and daring. All areas of life can be experienced on a large scale. It is the time of extremes – tempers flare up and excitement reigns, while the craziest dreams can come true. Social changes, political revolts and military coups are to be expected. 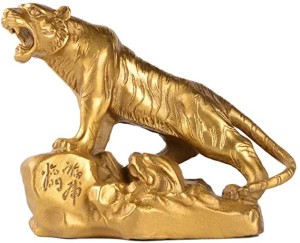 Tiger in brass for Fengshui

HOW TO HARMONIZE THE YEAR OF THE WATER TIGER AND FENG SHUI AT HOME?

The earthly branch corresponding to the Tiger is the third, yìn (寅), its azimuth direction is 60 ° and the corresponding element in Wuxing is Wood. This means that, whatever our sign, in order to prepare well our home well for the energies of the Chinese New Year we must favor the direction (60 °) and the reference element (Wood), which, being the combination of the year 2022 with the 12 Terrestrial Branches corresponding to Water, is found in the role of Son in the cycle of the 5 elements or phases (Wuxing), therefore in a favorable condition.

Going into greater detail, the 60 ° direction should be understood as an angle of 30 ° between 45 ° and 75 ° within the Chinese Compass (Ba Gua); therefore our 2022 direction will be northeast-east.

Taking into account that the elements involved are a positive combination of Wood and Water, we will have to take care of the Water-Wood-Fire energy chain with attention to the Fire which will be the outlet of the Wood if it is too abundant under the pressure of the Water of the Black Tiger.

We then identify on the Ba Gua which areas of our house fall in the directions of Water (north) and Wood (east and southeast) and we check if colors, materials and shapes harmoniously follow the sequence of the 5 element cycle, strengthening it where we realize that there are shortcomings.

In the east let’s not forget some rectangular objects, or vertical-shaped interior design elements, using materials in fabric and soft wood. In the north, on the other hand, we should try to use soft, curvilinear, wave shapes, without obvious symmetries, letting the imagination expand as does the water that takes the shape of its containers. 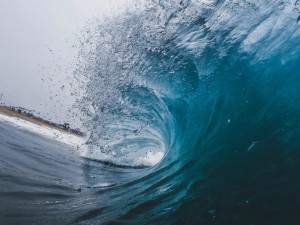 For the Chinese New Year 2022 in particular, we are going to “load up” the direction of 60 ° with the classic symbol of the Water Tiger, the crest of the wave.

These are general indications, while as already indicated in other sections of the site, care must be taken for each house that is suited to the specific characteristics of the environment and its inhabitants.